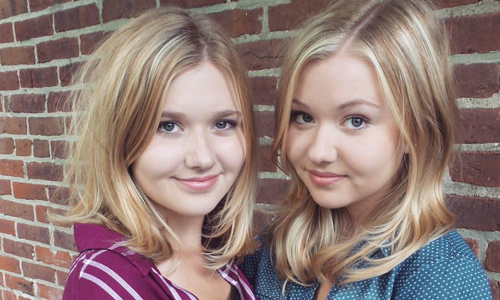 Our names are Hannah and Cailin Loesch, and we are eighteen-year-old identical twin journalists. We have always been interested in the news, but it wasn’t until we got a video camera for our twelfth birthday that we began filming segments of our own and broadcasting them on the internet. After several years of doing our web show, which we called “The Didja Know Show”, we decided that reporting was what we wanted to do for the rest of our lives. Just months later, in the spring of 2012, we auditioned and were chosen to be official web correspondents for Teen Kids News, an Emmy award-winning television news show for kids and teens.

Since then, we have covered countless entertainments events, including Vh1’s Do Something Awards, Comedy Central’s Night of Too Many Stars, Nickelodeon’s Worldwide Day of Play, NBC’s The Celebrity Apprentice, and NBC’s American Comedy Awards, movie premieres such as The Croods, Epic, Turbo, and Smurfs 2, and were the youngest reporters to cover the entire eighth and ninth season of NBC’s America’s Got Talent. Our celebrity interviews include Nicolas Cage, Emma Stone, Ryan Reynolds, Heidi Klum, Howard Stern, Amanda Seyfried, Howie Mandel, Al Roker, Colin Farrell, David Copperfield, Mel B, Cody Simpson, and Eyewitness News and Teen Kids News creator Al Primo. In addition to covering entertainment news, we have reported on topics such as The Battle of Gettysburg, autism, and Earth Day.

We are also extremely passionate writers (Our first book, The Twin Connection, is published by Wyatt-MacKenzie and was released October 1st, 2014), and we blog for Huffington Post Teen.

Marvelous Miss highlights girls who are doing good by making a difference in the lives of others and changing our world for the better. Do you know a girl who is making a difference, tell us about them in the comments or email us: virtuousgirls1@yahoo.com.