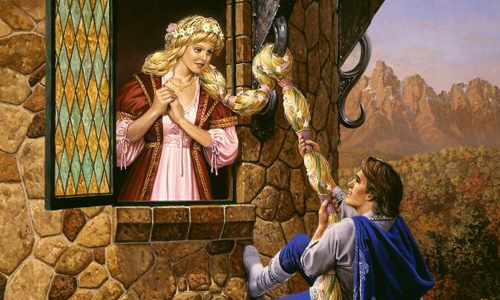 Behind the Story: Rapunzel is a fairy tale favorite. It became even more of a favorite of mine after Disney released their 2010 twist on the story with Tangled. The original Rapunzel fairy tale and Tangled are different in more ways than one, but both are delightful nonetheless. When a man ventures into a forbidden garden to pick some rampion out of love for his wife who is expecting their first, much-longed-for child, he is caught by the enchantress who owns the garden.

“How can you dare,” says she with an angry look, “descend into my garden and steal my rampion like a thief? You shall suffer for it.”

And the man answers, “Ah, let mercy take the place of justice…”

It is from this statement that we take our faith cue, using justice and judgment interchangeably. The woman was in the wrong because it was she who pined for the rampion and begged her husband to get her some. The enchantress was ready to dish out judgment, yet the man begged for mercy on her behalf. If we were to exchange these fairy tale characters for a real life situation, you and I would be the woman longing for that which is forbidden. God would be the enchantress ready to punish us for our disobedience and desire for sin, and Christ would be the man entreating for mercy to take the place of justice.

When Adam and Eve ate the forbidden fruit from the tree of knowledge of good and evil in the Garden of Eden, God had no choice put to punish them. Their punishment caused us to be punished. Their suffering caused us to suffer. Their curse also put us under a curse of continual and constant sin, destruction, and death. Through one man, sin entered the world, and death through sin, and in this way death came to all people, because all sinned.

Because God is righteous, He has to punish sin. We could not call Him just if He did not mete out justice. However, God the Son interceded for us and pleaded for God the Father not to do away with us completely. Imagine the conversation taking place in Heaven:

“They shall suffer for their sins,” says God.

We must be careful not to think that God is all justice and no mercy or all mercy and no justice. He is both justice and mercy.

It was God’s judgment that threw Adam and Eve out of Eden; it was God’s mercy that made them clothing from animal skins.

It was God’s judgment that sent the Flood; it was God’s mercy that kept Noah and his family from perishing.

It was God’s judgment that destroyed Sodom and Gomorrah; it was God’s mercy that saved Lot.

It was God’s judgment that cast Satan out of Heaven; it is God’s mercy that still allows him to roam the earth.

It will be God’s judgment that destroys the earth in the end times; it is God’s mercy that hasn’t destroyed it already.

If God was all mercy, sin would go unchecked and crime would go unpunished. Everyone, even those who do not believe in Christ, would go to Heaven. How one lives down here wouldn’t really matter. God’s mercy toward us does not give us license to do even more sin. His mercy gives us freedom to do what is right.

Mercy is built on a foundation of justice. If there was no judgment, there would be no need for mercy. C. S. Lewis said, “Mercy, detached from Justice, grows unmerciful.” In every judgment of God there is mercy. The holy righteousness of God cries out “justice” against our sin. The blood of Jesus cries out “mercy”. And by His mercy, we are saved.