The apostle Paul was often put in prison because he refused to shut up about his faith in Jesus the Christ. On one such occasion, while he was in Jerusalem, the book of Acts records that nearly the whole city went into an uproar after some people saw him at the temple. This angry mob tried to beat Paul to death. Some Roman soldiers who were nearby delivered him from the mob by arresting him. Paul then barely saved himself from being flogged and interrogated before he was taken before the Sanhedrin and, finally, put in prison.

While Paul was in prison, some Jews plotted to kill him. They were so dedicated to carrying out this evil plot that they refused to eat or drink until he was dead. They probably would have been successful too if it weren’t for Paul’s nephew saving the day. Acts 23:16 says:

But when the son of Paul’s sister heard of this plot, he went into the barracks and told Paul.

When Paul was told about the plot, he called a Roman soldier and told him to take his nephew to the commander. This was done, and Paul’s nephew told the commander about the plot. He said, “Some Jews have agreed to ask you to bring Paul before the Sanhedrin tomorrow on the pretext of wanting more accurate information about him. Don’t give in to them, because more than forty of them are waiting in ambush for him. They have taken an oath not to eat or drink until they have killed him. They are ready now, waiting for your consent to their request.” The commander believed Paul’s nephew and told him not to tell anyone that he reported the plot to him.

In this way, Paul was saved. Instead of being killed, he was transferred safely to Caesarea. Perhaps Paul’s sister deserves some credit for this just as much as her son. END_OF_DOCUMENT_TOKEN_TO_BE_REPLACED

Around 445/444 B.C., a remnant of Jews who were in Judah were suffering from low morale because the city of Jerusalem had been torn down and no one had the strength or mind to rebuild it. The city still had a temple, but all the walls around the city had been torn down. Jerusalem had no protection from enemy attacks. During this time, a man named Nehemiah, was cup-bearer to the king of Persia, who was called Artaxerxes. (We learned about Artaxerxes’ supportive queen wife in an earlier post.) When Nehemiah heard about the sad state of affairs in Jerusalem, he asked King Artaxerxes for permission to return to Jerusalem and rebuild the city. King Artaxerxes let him do so, even providing him with timber from his own forest.

So, Nehemiah went back to Jerusalem, rallied the people, and in a few weeks they had the walls around Jerusalem rebuilt, giving the city protection from their enemies. However, Nehemiah and those who worked with him, were not without opposition while they worked. They were repeatedly harassed and opposed by two enemies in particular, Tobiah and Sanballat. Also in league with Tobiah and Sanballat was a woman named Noadiah. She was a prophetess.

Thankfully, Nehemiah did not allow himself to be distracted by Tobiah, Sanballat or Noadiah. He simply remained focused on God. Nehemiah 6:14 says that he prayed:

Remember Tobiah and Sanballat, O my God, according to these things that they did, and also the prophetess Noadiah and the rest of the prophets who wanted to make me afraid.

Nehemiah’s prayer reveals the way in which Noadiah tried to get him to stop his good work. END_OF_DOCUMENT_TOKEN_TO_BE_REPLACED 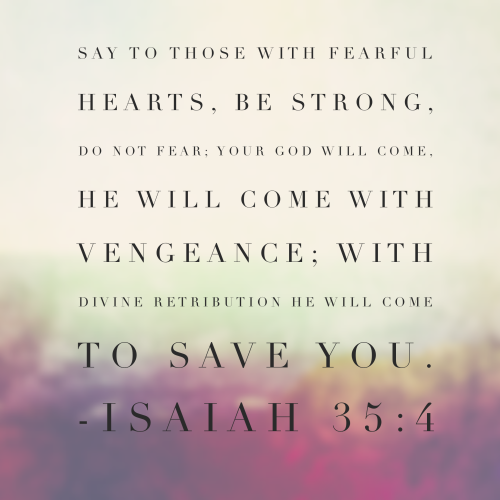 Be strong. Do not fear. God is coming. 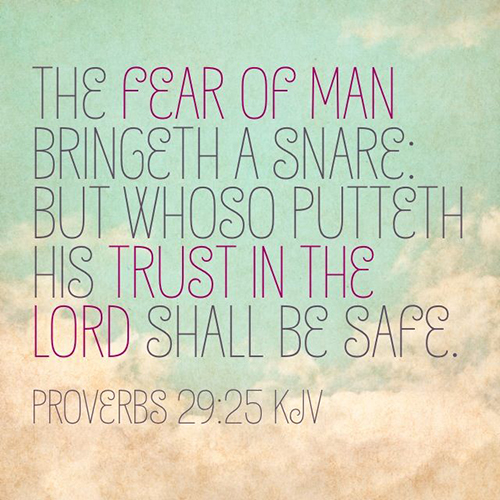 Being concerned of what others think about you is a deadly trap, but trusting in the Lord will keep you safe.

No evil shall befall you,
Nor shall any plague come near your dwelling;
For He shall give His angels charge over you,
To keep you in all your ways.
– Psalm 91:10-11

In every negative situation, we can believe God for protection and eventually deliverance. Though Satan seeks to destroy us, God has given His angels guardianship over us and the powers of hell cannot hurt us without Heaven’s permission.

Disease, disaster, and death may surround us, but we do not have to fear. As long as we keep the faith, no depravity will touch us. If we stumble, angels will catch us. They will keep us from falling.

At home, at school, or at work; whether sleep or awake; God’s angels will guard us wherever we go. 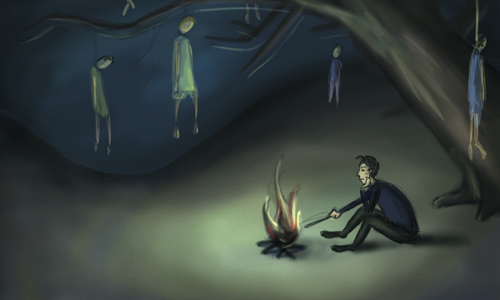 Story Scripture: For God hath not given us the spirit of fear; but of power, and of love, and of a sound mind. – 2 Timothy 1:7

Story Saying: Let us not pray to be sheltered from dangers but to be fearless when facing them. – Rabindranath Tagore

Behind the Story: Oh, how splendid it would be if we did not know how to shudder! The boy in our story is a more than excellent example of what it means to live a life free from the binding grip of fear. He was confronted with a “ghost,” hanging dead men, and numerous evil spirits, but none of it made him afraid.

END_OF_DOCUMENT_TOKEN_TO_BE_REPLACED

The Lord is before me, behind me, and beside me. Why should I be afraid?