Luke 24:36-53
(36-49) Jesus Appears to His Disciples
When Jesus appears to His disciples, He reminds them to believe and to have confidence that everything written about Him in the Scriptures will be fulfilled. Many of the prophecies in the Bible concerning Christ have already been fulfilled. For the ones that have yet to be fulfilled, we can be confident that every word of them will be accomplished. The power from on high that Christ promised would come to the disciples once He ascended is the same power that is available for us to be clothed in today. The Holy Spirit is still at work in and through the lives of all those who believe in and follow Christ.

(50-53) The Ascension
Before, during, and after Jesus’ crucifixion, burial, and even His resurrection, the disciples and some others who had followed Jesus, were depressed, uncertain, and perplexed. Some disbelieved that Christ had really risen from the dead until He appeared to them. Others were startled, frightened, troubled, and full of doubt regarding all that had happened to the one they believed to be the Messiah. But after witnessing Christ’s ascension, their faith became firm and secure. Their doubts disappeared and they were filled with great joy. They knew their Savior was alive and held power over death and Hell. No longer were they fearful and perplexed about the future. Such is the power of knowing and believing in a crucified, resurrected, and ascended Lord.

Favorite verse: (36) As they were talking about these things, Jesus himself stood among them, and said to them, “Peace to you!”

Luke 24:1-35
(1-12) The Resurrection
Jesus repeatedly told the people who were most often with Him that He would be crucified, buried, and resurrected on the third day. How quickly they did forget! How great was their unbelief! When everything happened just as He said it would, the women were “perplexed” to not find Christ’s body in the tomb. The disciples thought their discovery “an idle tale.” Peter went home “marveling” that the living could not be found among the dead. And so it is the same with us. We must often remind ourselves of the words of Christ through interaction with other believers, prayer, and Scripture reading. We are repeatedly told in the Bible that Jesus is coming again. When He comes, will we be perplexed to find ourselves suddenly caught up with Him in the air? Will the rising of the dead in Christ seem to us an idle tale? Will we marvel at the glorious appearing of the great God and our Saviour Jesus Christ as if we never believed it would take place?

(13-35) On the Road to Emmaus
Cleopas, his companion, and other Jews were disappointed and saddened by the death of Jesus because they were expecting Him to redeem Israel. They failed to realize that through His death and resurrection, redeeming Israel is exactly what He did. And more than that, He redeemed the entire world.

Favorite verse: (5) And as they were frightened and bowed their faces to the ground, the men said to them, “Why do you seek the living among the dead?

Luke 23:26-56
(26-43) The Crucifixion
The soldiers who were escorting Jesus grabbed Simon of Cyrene and forced him to carry Jesus’ cross. Christ does not force anyone to take up a cross, but all who would follow Him are required to do so. Before we can follow Him into Paradise, we must first follow Him to the place that is called The Skull and be crucified with Him so that it is no longer we who live, but Christ in us.

Despite being in great agony, Jesus remained concerned about others. On His way to the cross and while hanging on the cross, He sought to comfort the women who were mourning and lamenting for Him. He forgave those who mocked and scoffed at Him. He assured the repentant criminal that salvation was his and that he had a place in Paradise upon his death.

Luke 23:1-25
(1-5) Jesus Before Pilate
What kind of man was Pilate? The Bible doesn’t give any specifics, so it’s impossible for us to know for certain, but the Jewish philosopher Philo writes of “his venality, his violence, his thefts, his assaults, his abusive behavior, his frequent executions of untried prisoners, and his endless savage ferocity.” If Philo is telling the truth, then Pilate was by all means a cruel and emotionless person. In all his meanness, however, even he could not find fault with Jesus the Christ.

I have always imagined Pilate, not as a heartless monster, but as a seeker. It seems to me that he wanted to know more about the Man brought before him. Despite all the accusations laid against Him, Pilate sensed that there was something different about Jesus. If Pilate didn’t have so much power and if he hadn’t been under so much pressure, I think he would have sat down with Jesus and discovered the answer to his question, “What is truth?”

(6-16) Jesus Before Herod
There are a lot of people today who are like Herod. They demand a miracle from Jesus before they believe in Him. And if a miracle does not happen, then they make a mockery of Him. True belief in Christ does not require a sign, only faith.

(18-25) Pilate Delivers Jesus to Be Crucified
The last verse of this passage reads that Pilate “delivered Jesus over to their will.” From a human perspective, that is exactly what he did. But from a heavenly perspective, Jesus was actually delivered over to the will of His Father. God used the angry, jealous, insistent actions of the religious leaders and the crowd to accomplish His eternal purpose of having salvation being made available for all mankind.

Favorite verse: (4) Then Pilate said to the chief priests and the crowds, “I find no guilt in this man.”

Luke 22:47-71
(47-53) Betrayal and Arrest of Jesus
Yes, Jesus could have ordered His disciples to fight or He could have simply called down a league of angels to rescue Him, but escaping from the inevitable fate of the cross was the last thing on Jesus’ mind. Jesus had already submitted Himself to His Father’s will and He was determined to fulfill it. His love for us was so much greater than the shame of mockery, the agony of crucifixion, and the horror of death.

(54-62) Peter Denies Jesus
We ought to consider how our reaction to Jesus the Christ can affect others’ faith. Peter’s angry, blatant denial of Jesus might have given his inquirers a bad image of Him. Without knowing the full story, they might have wondered why he was so adamant about not being associated with someone who many considered to be the Christ. They probably concluded that He was guilty of whatever crime He was currently on trial for. Because our words, actions, and attitudes make impressions on people, we should be careful that our reaction to Jesus is one of positive pride, not shame, and of devoted love and loyalty, not embarrassment.

Favorite verse: (61) And the Lord turned and looked at Peter. And Peter remembered the saying of the Lord, how he had said to him, “Before the rooster crows today, you will deny me three times.”

Luke 22:31-46
(31-34) Jesus Foretells Peter’s Denial
Even though Jesus knew Peter would deny Him, He still prayed for him. He prayed that his faith would not utterly fail; that he would only stumble at Satan’s sifting, and not fall; that he would not forever remain turned from the Lord, but would be used by Him to strengthen others. Christ knows us better than we know ourselves. He knows the weak points of our faith, the temptations we are prone to give in to, and how Satan seeks to destroy us. It is with this knowledge and for many more reasons that He prays for us just as He prayed for Peter. He is at God’s right hand, constantly interceding for us.

(39-46) Jesus Prays on the Mount of Olives
Christ prayed for His Father to remove the cup of wrath from Him, if He was willing. But God was not willing to do so. That specific request was not granted, but Christ’s prayer was still answered because above wanting the cup to be removed, Christ wanted God’s will to be done. We can be certain that whenever we pray according to the will of God, even if it is not exactly what our heart desires, our prayer will be answered. Not our will, but His, be done. His kingdom come, not ours.

Favorite verse: (42) Saying, “Father, if you are willing, remove this cup from me. Nevertheless, not my will, but yours, be done.”

Luke 22:1-30
(3-6) Judas to Betray Jesus
Judas had time to think over what he had agreed with the chief priests and the scribes to do to Jesus. If he had considered the consequences (heavy guilt and premature death) of his actions before he had acted, I doubt he would have gone through with his plan. If our foresight was as good as our hindsight, perhaps much of our behavior would be different and perhaps our choices would also be wiser.

(24-30) Who Is the Greatest?
Jesus again reminds His disciples that the greatest are those who serve.

Favorite verse: (19) And he took bread, and when he had given thanks, he broke it and gave it to them, saying, “This is my body, which is given for you. Do this in remembrance of me.” 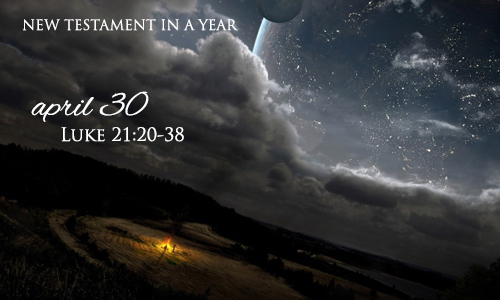 Luke 21:20-38
(25-28) The Coming of the Son of Man
If we live to see the beginning of the end of the world and are caught up in the distress and perplexity of that time, then would not be the time for us to lose heart or be fearful. Christ says that when the sea begins to roar and when the heavens begin to shake, we should straighten up and raise our heads. Why? Because He is about to come. Our redemption is drawing near.

(29-33) The Lesson of the Fig Tree
For believers, the destructive end is only a more glorious beginning. The passing away of this temporal Heaven and earth is the revealing of an eternal one.

Favorite verse: (27) And then they will see the Son of Man coming in a cloud with power and great glory.

Luke 21:1-19
(10-19) Jesus Foretells Wars and Persecution
If Christians were persecuted for their own name’s sake or for the sake of any other name, there would be no worth in that. But because it is for Christ’s name’s sake, every amount of persecution is worth it and not endured in vain. Whenever we find ourselves in a difficult, mean, or troublesome situation, we should consider it as an opportunity to bear witness for Christ. We can share the Gospel wherever we are, to whoever we may be around. In our bleakest moments, God will give us wisdom that our enemies will not be able to understand and words that none will be able to contradict.

Favorite verse: (19) By your endurance you will gain your lives.