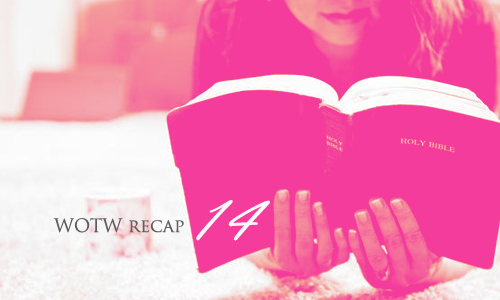 When God created woman, He made a very special creation. He made us beautiful and unique. He made us strong and resilient, gutsy and spirited, sassy and sweet. And He loves us. God really, really loves His girls. And the Bible is filled with many women – some good, some bad – all of who God made, who God loved, and who we can learn many lessons from.

So far in our Women of the Word series, we have looked at over 140 different female figures in the Bible. They all have something to teach us. So, (drum roll, please). Here is our fourteenth series recap:

In Romans 16:13, Paul gives a shout-out to Rufus and his mother. He calls Rufus “chosen in the Lord” and identifies Rufus’ mother as a woman “who has been a mother to me, too.” The Bible gives scarce specifics about Paul’s family. We know that his father was a Pharisee. In Acts 23:6, Paul says, “I am a Pharisee, the son of a Pharisee.” We also know that he had a sister who raised her son to be brave. No mention is made of Paul’s mother, so we can only speculate about who she was. Perhaps she died while Paul was young and he grew up without knowing his mother. Or perhaps she was a devout Jew who was proud of the Saul version of her son as he persecuted Christians, but was displeased when he became a Christian and changed his name to Paul.

This latter speculation is quite possible. Jesus often warned His twelve disciples (of which Paul was not one), that they risked losing everything – their lives, their friends, and even the affection of their families – by choosing to follow Him. When Paul gave his heart to Jesus the Christ, Paul’s mother may have disowned him, and Rufus’ mother may have taken him in and loved him as she did her own son.

Whether Paul grew up without a mother or whether he and his mother just weren’t on good terms, it is clear that he found a maternal figure in Rufus’ mother, from whom we can learn to care for others. END_OF_DOCUMENT_TOKEN_TO_BE_REPLACED